Rowing and paddling have been a part of Chicago’s sports fabric for over 150 years and prior to World War II was a major source of entertainment, and, in some cases, betting. In October of 1858 a professional rowing event was held on the Chicago River with a $1,000 prize, about $25,000 today. The Metropolitan Rowing Club of Chicago and the Shakespeare Rowing Club of Toronto squared off in fours over a 5-mile course on the Chicago River with Shakespeare winning the race.

In 1887 Lincoln Park was created using landfill from the debris left after the Chicago Fire and the North Lagoon (Lincoln Park Lagoon today) was created specifically for rowing. During the 1880’s to 1900’s there were several rowing and paddling clubs throughout the city with at least seven calling the North Lagoon home. These clubs were the Delaware, Catlin, Social Athletic, Quintard, Ontario, Iroquois and Ogden who held annual rowing and paddling regattas that would attract competitors from around the country and thousands of spectators who would line the banks of the lagoon.

After the turn of the century the Catlin, Iroquois, Union, and Chicago Rowing and Canoe clubs combined their resources to construct the Lincoln Park Boat House for $15,000, dedicating the facility on August 8, 1908. Designed by Dwight H. Perkins in conjunction with landscape architect Ossian Cole Simonds, the new boat house was to become part of the natural environment and designed in the Prairie School of design so that it would blend into Lincoln Park. While much has changed in the city around it, the 1908 boat house is still in use today and looks much like it did over 100 years ago.

Lincoln Park Boat Club was organized on June 8, 1910 when the Catlin, Iroquois, Union and Chicago Rowing and Canoe clubs merged. LPBC has been in continuous operation ever since, serving Chicago’s rowing and paddling community for 100 years.

From 1910 to the Great Depression, the Lincoln Park Boat Club hosted rowing and paddling events on the lagoon that would attract competitors from around the Midwest and as many as 25,000 spectators. The annual Water Sports Festival included popular events such the half mile coxed eights race and the quarter mile “Crab Race” where canoes were paddled by hand. The event even included swimming and platform diving competitions. 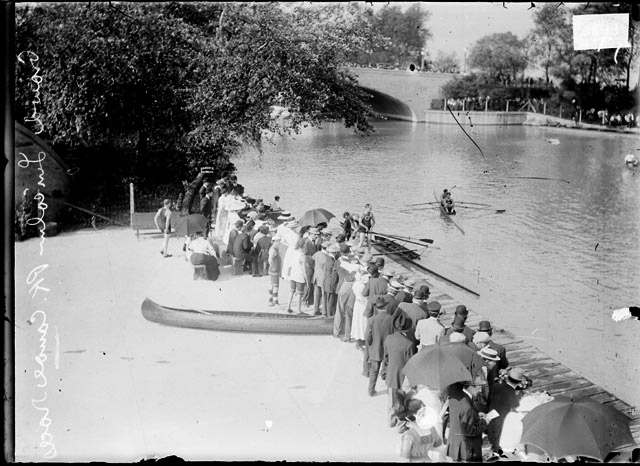 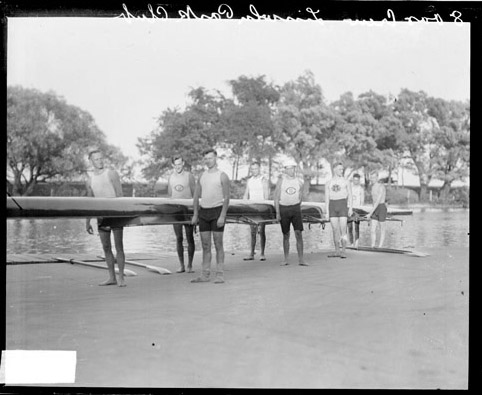 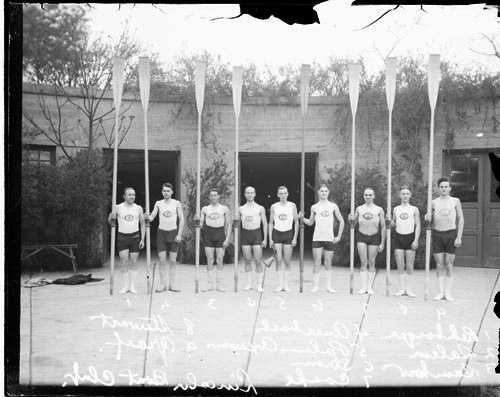 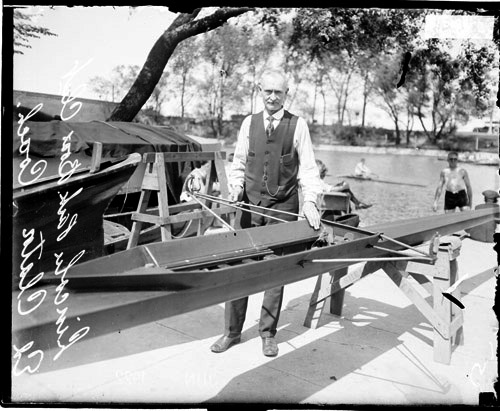 By the Depression the large rowing and paddling events largely ended and LPBC almost closed in 1936-37 when more than half of the lagoon was filled to build Lake Shore Drive. However, LPBC managed to prevent the lagoon from being filled entirely and it took on the form you see today.

In the 1950’s and 60’s, Lincoln Park Boat Club continued to offer strong programs and supported many high school teams such as Lane Technical, Weber and St. Michael’s. Perhaps due to an early push for equal rights and the loss of population to the suburbs, the once all men’s club began to admit women in the 1950’s. Copies of the 1961 Bylaws show a completely separate classification for women members who held no voting or equipment rights compared to their male counterparts.

By the 1970’s membership in the club was in decline and many of the city high school and collegiate rowing programs were ending. By 1977 the boat house had fallen into disrepair and again the future of the club looked to be in jeopardy. Possible closure of the building was again staved off by the actions of club members and their work energized LPBC to rebuild itself. In 1979 the Chicago Park District undertook a major renovation of boat house and the decline in club membership had been halted.

On May 31, 1980 the club hosted the first Chicago Sprints Rowing Regatta, a single day event with seven races and attended by several Midwest club and university rowing programs. The Chicago Sprints has been held annually since and today is one of the largest summer rowing events in the Midwest with two full days of racing, over 25 individual events, and participants from all over the country.

During the 1980’s and 1990’s the Lincoln Park Boat House supported not just the Lincoln Park Boat Club but rowing crews from Northwestern University, the University of Chicago, Loyola Academy and St. Ignatius Prep School. Rowing and paddling continued to grow and in 1997 the LPBC adult sweep rowing teams, with the University of Chicago and Northwestern University crews, moved onto the Chicago River where they have operated and flourished ever since.

During the first decade of the 21st Century LPBC’s competitive and recreational programs have continued to grow and expand as the club has also expanded to Park 571 in Bridgeport on the river.