As we continue our 110 Strong & 110 More series, we’re going to be interviewing some of Lincoln Park Boat Club’s longest standing members to learn about what the club was first like when they joined, their favorite memories, and what they love about LPBC.
First up: Chuck Reiter and Terra Levin

Chuck grew up in the Rogers Park neighborhood of Chicago and attended Francis Parker High School. He then went on to Boston University for undergraduate and the University of Miami for law school. In his career, Chuck has been a trial and appellate lawyer, SVP, General Counsel and Secretary of Loyola University Health System, EVP of Palos Health, and now is a partner at Chicago law firm ReiterBurns, LLP. 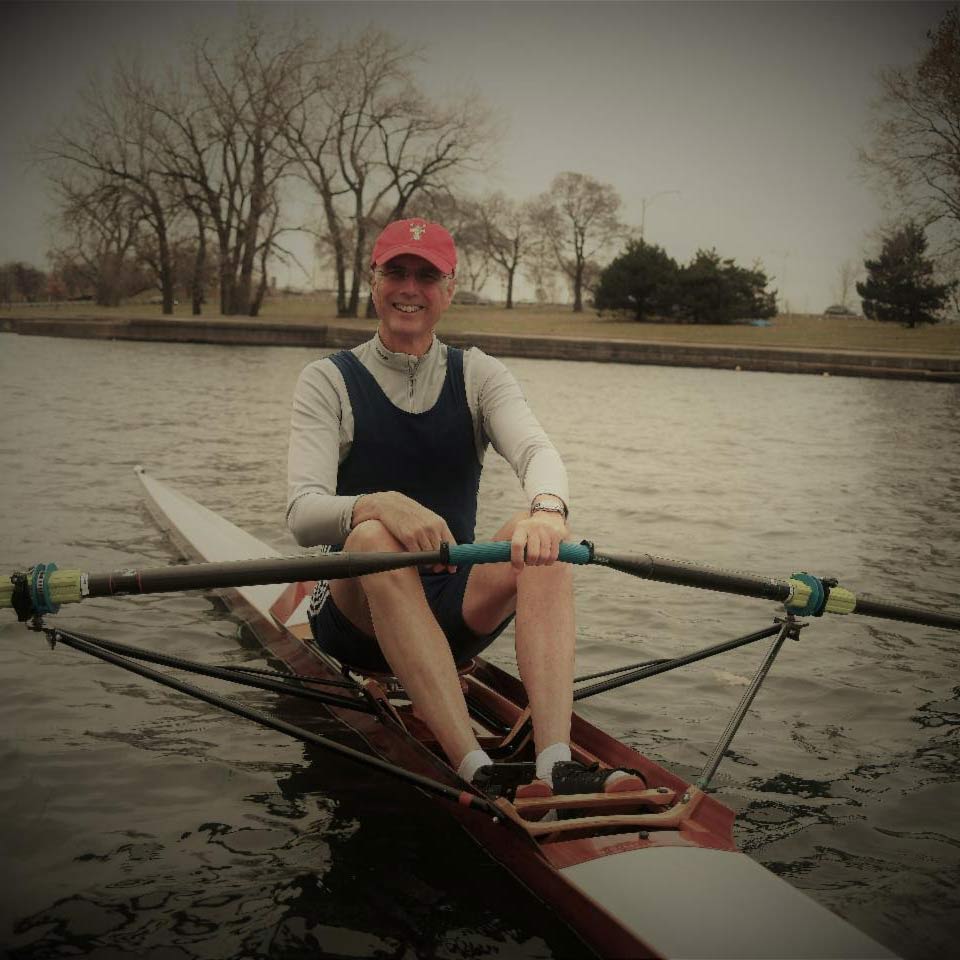 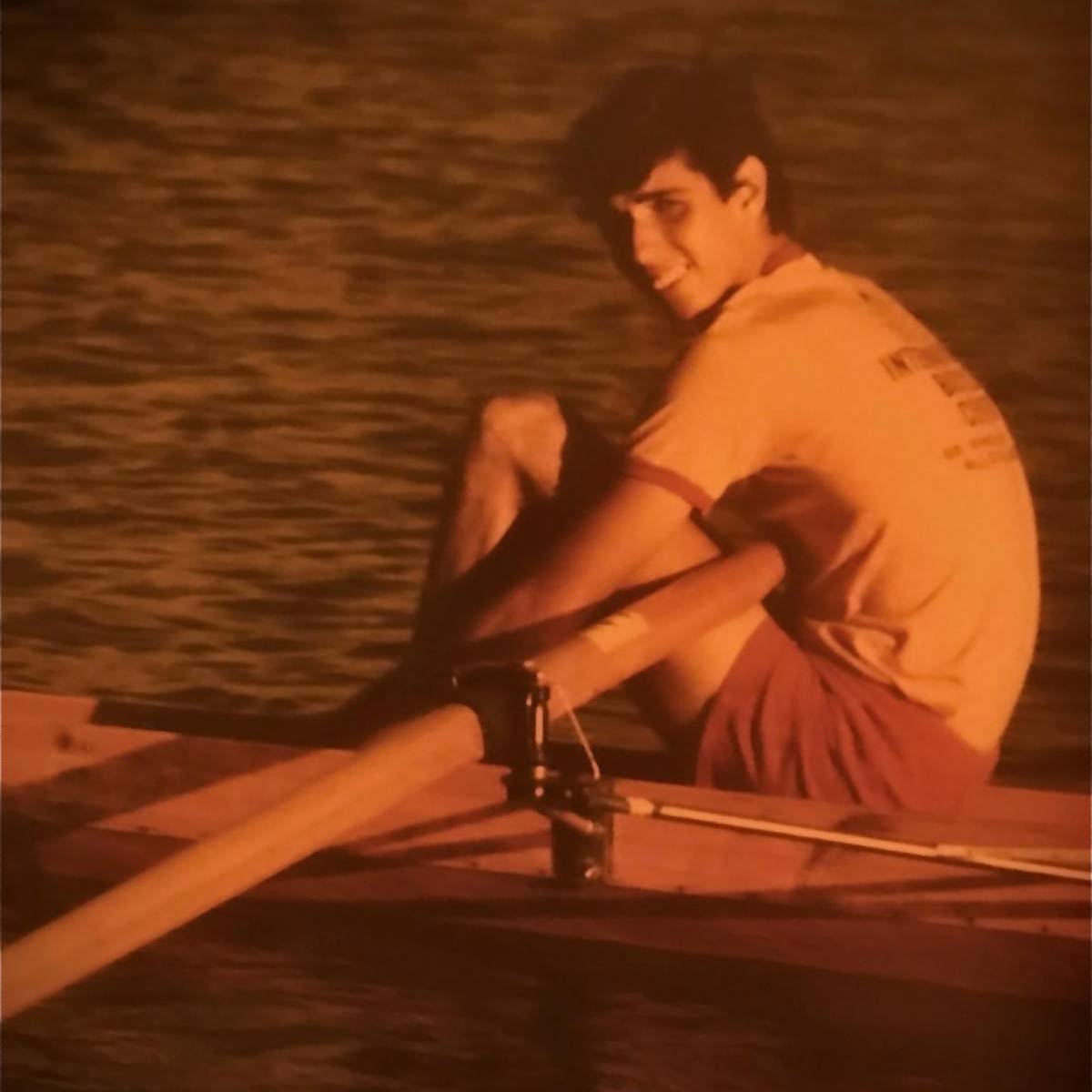 Chuck rowing sweep back in 1976 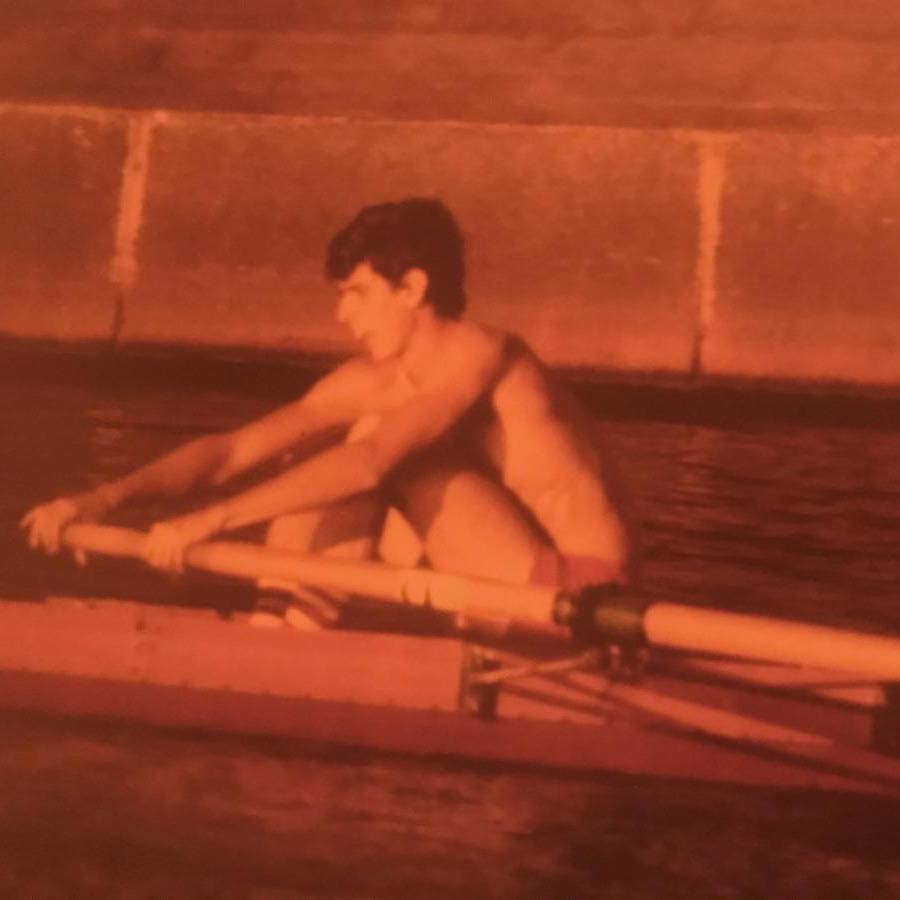 Q: When did you first join LPBC?

Q: Where did you learn to row?

A: Blowing by Brown under the Mass Avenue Bridge (Boston) with a pal of mine sitting in the same seat in the Brown boat — still have the shirt!

Q: What do you love about the LPBC community?

A: It revived rowing in Chicago.

Q: What was different about LPBC when you first joined compared to now?

A: Chuck says when he first joined the Chicago Park District had just taken over the club and the club spent a great deal of time raising money to buy equipment, founding the learn to row program, and starting the Chicago Sprints. He recalls driving to pick up the then new Kaschper double.

A: His custom built King single

A: Chuck used to be very active in learn to row and even served as the women’s team coach for a few years.

A: Head of the Charles

A: After four years of college sweeps, and with the exception of a couple of fours entries in HOCR after college, I’ve been a sculler.

A: Dr. Rich Orsi, with whom I rowed for four years, went to national camp, and talked into Crastbury with his wife some years ago. I would also mention my coach, Hugh Foley, Olympic gold medalist and the person who taught me to scull by saying there are only three rules: 1. Thumbs over the ends, 2. Left over right, and 3. For God’s sake don’t let go of the handles!

Terra currently teaches learn to scull at the Dammrich Rowing Center. She recently retired from working in the healthcare field for 20 years; prior to that she worked in the sports management field and other marketing positions. In addition to rowing, Terra loves to cross country ski and cycle. 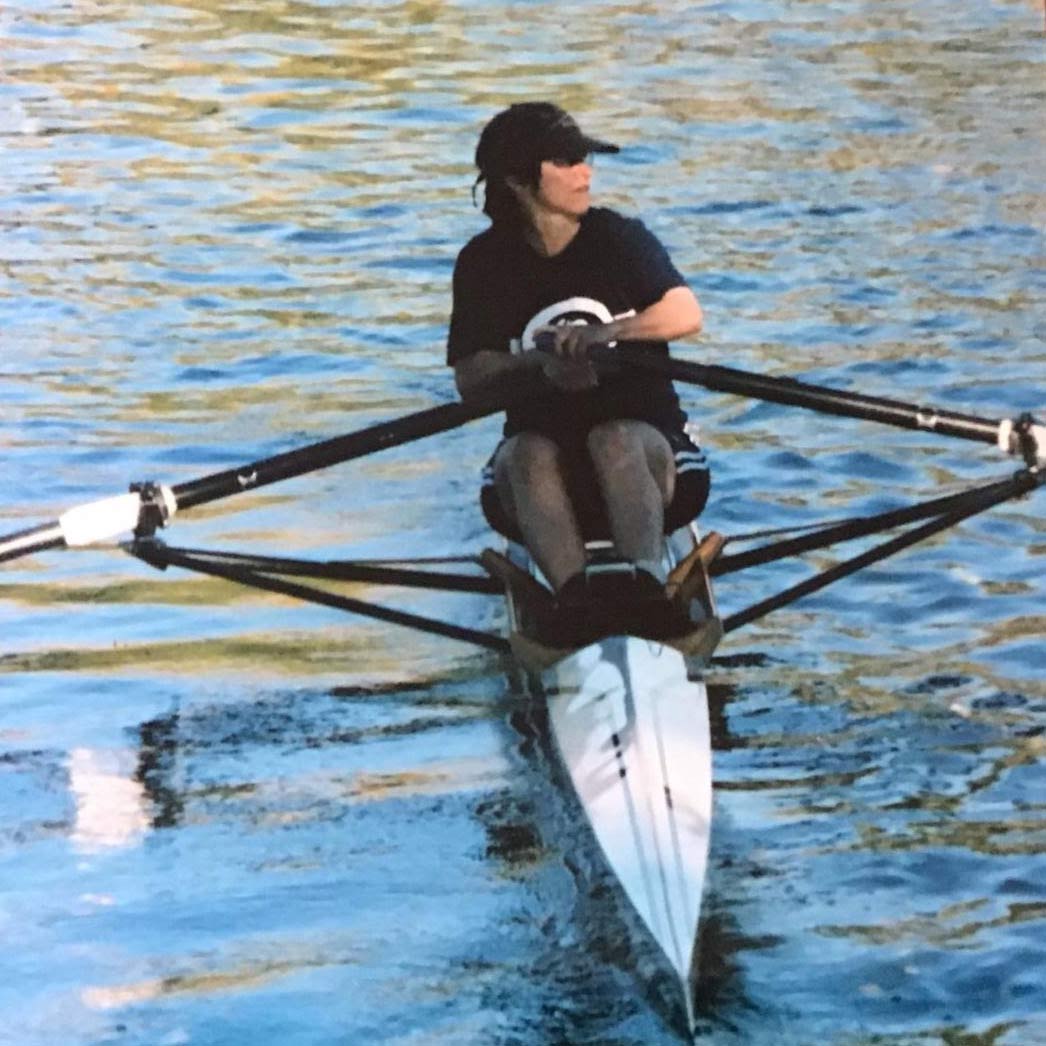 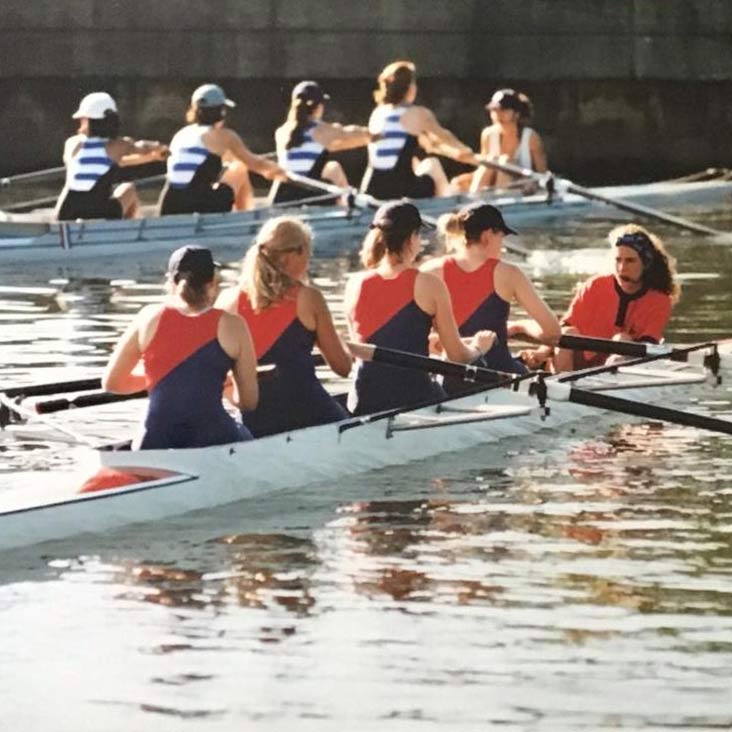 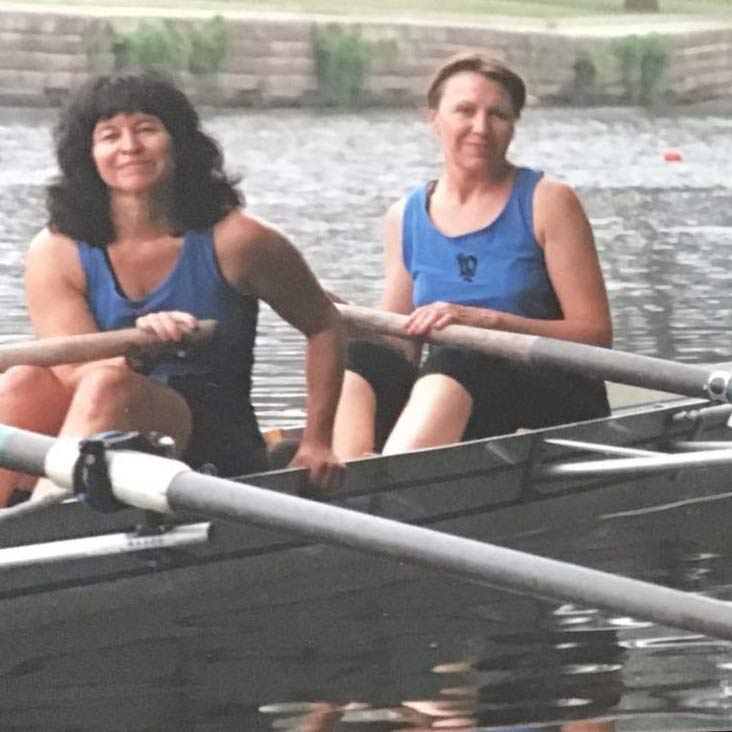 Q: When did you first join LPBC?

Q: Where did you learn to row?

A: At LPBC — I was a runner and I was doing a 13 mile run which I planned to end at LPBC to meet my husband after his row. When I arrived, there were three women and a cox who needed a fourth rower. They asked me to jump in the boat even though I’d never rowed. Not very pleasant but enough to hook me to the sport! Terra learned to sweep row and cox at LPBC but learned to scull at Craftsbury Sculling Center with her husband, having been the first to travel there from LPBC.

A: Winning in the women’s 8+ against St. Louis by a hair length at the Chicago Sprints

Q: What do you love about the LPBC community?

A: All of Terra’s closest friends started at LPBC and she’s still in-touch with many of them.

A: Well the Detroit Boat Club was supposed to bring a fleet of boats to our Sprints, but we heard at the last minute that they were not coming. We did not have enough boats to supply everyone who needed to race… So we took an old wooden boat in bad shape and covered it with white contact paper, everyone thought it was new (If they looked closed enough they could see the mosquitoes stuck to the paper), but it held up for the race and several months after that…we called it Adversity.

A: The Chicago Sprints of course! I helped organize the first one with Chuck Hewitt, former Olympian and Harvard rower. Chuck was really the force behind getting the Boat Club going again — in the 70s, there was hardly any rowing going on; nor was anyone very well organized or competing.

A: Started as a sweep rower but now only scull. I have rowed in every position in the boat — cox, bow, stroke — and have coached learn to row and learn to scull. Terra just received her Level 2 Coaching Certificate from USRowing.

A: Terra hates racing sprints and much prefers head races like Head of the Hooch

Q: Who is your rowing best friend?

A: Terra says all of her best friends are from rowing but if she had to pick one she would say Jackie Zydeck who also served as one of LPBC’s commodores. 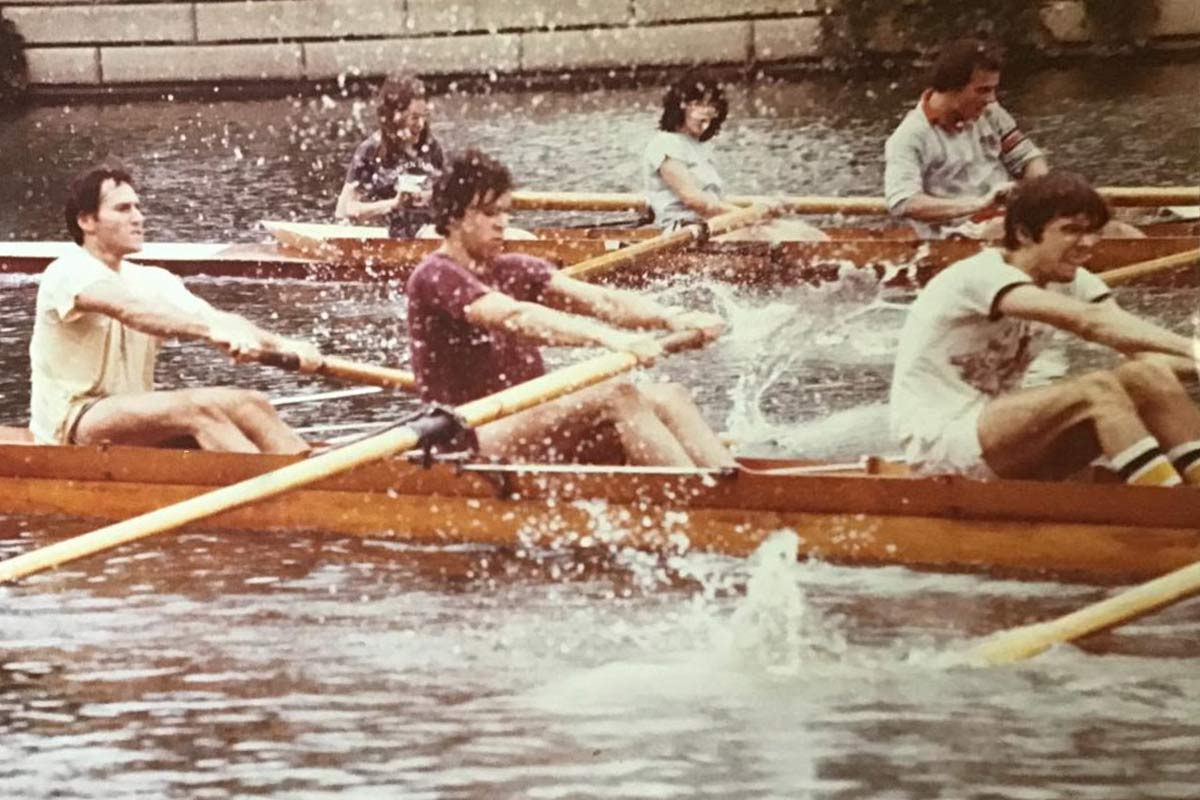 In the near boat from bow: Bob Oppenheim, Larry Muri, and Rick Beye. In the far boat, Terra is in 2 seat

Terra leaves us with a teaser that Playboy photoshoot once took place at the boathouse… we can’t wait to hear more about that!

Consider a donation to LPBC to honor our 110 year history, and support our organization and members in continuing to be a leader of rowing in the Chicago area. 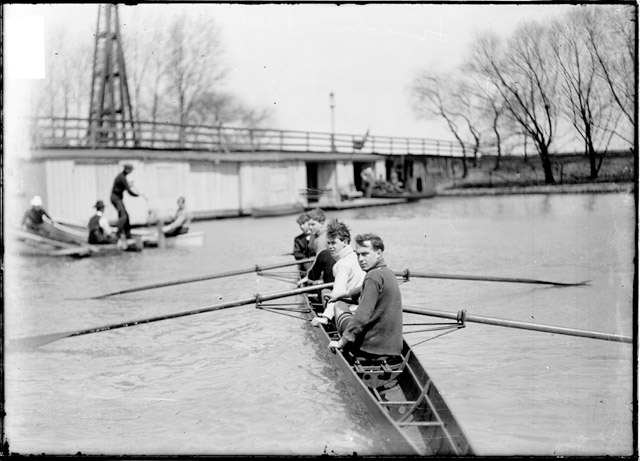